Iran Urea is a raw material used in the manufacture of many chemicals, such as various plastics, urea-formaldehyde resins, and adhesives. It is also essential for making feedstock, glue, fertilizer, commercial products, and resin production.

Urea also is known as carbamide, is an organic compound with chemical formula CO(NH2)2. This amide has two –NH2 groups joined by a carbonyl (C=O) functional group.

It is highly soluble in water and has a pKa close to zero. Urea is essentially the waste produced when the body metabolizes protein. It is not only produced by humans, but also by many other mammals, as well as amphibians and some fish. Urea was the first natural compound to be artificially synthesized using inorganic compounds — a scientific breakthrough.

The primary raw material used to manufacture urea is natural gas, which ties the costs directly to gas prices. Consequently, new plants are only being built in areas with large natural gas reserves where prices are lower. The finished product is transported around the globe in large shipments of 30,000 metric tons. The market price for urea is directly related to the world price of natural gas and the demand for agricultural products. Prices can be very volatile, and at times, unpredictable.

Below you can find some of Iran Urea Usages. 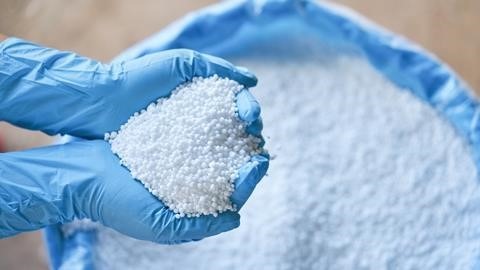 The commercial production of urea is obtained by the reaction of ammonia and CO2, so we will first briefly explain ammonia.

Ammonia is used to produce fertilizers and in some cases directly into the soil (pure form). it is used to produce a liquid or solid fertilizers such as urea, Ammonium nitrate, Di ammonium phosphate, nitric acid, Ammonium sulfate. In addition to producing chemical fertilizers, ammonia is also used in the production of caprolactam, explosives, aniline, chemical solution for solvents and cleaners for domestic use. Ammonia without water in standard situation is in the form of gas and colorless, so by applying pressure it turns to liquid. It is highly toxic and corrosive and has a pungent odor. Population growth in line with economic growth is leading to increased demand for protein in fruits and vegetables. increasing demand for protein is leading to increased consumption of cereals. Growth in the consumption of cereals, fruits and vegetables and in the whole crop is the reason for the increased consumption of agricultural fertilizer.

Urea or carbamide is an organic compound with the chemical formula CO(NH2) 2. The molecule has two residual amine groups (NH2-), which bind to a carbonyl group (-CO-) which is a functional group.

Urea plays an important role in the metabolism of nitrogen-containing compounds in the animal’s body, while being the main nitrogen-containing substance in mammalian urine. This compound: hard, colorless, odorless (though the ammonia that is produced in the presence of water and also contains water vapor in the air, has a strong odor), is neither acidic nor alkaline, highly soluble in water and relatively non-toxic, urea is widely used in fertilizers as a rich and suitable source of nitrogen. Urea is also one of the most important raw materials in the chemical industry. The creation of this organic compound from an inorganic precursor, by Friedrich Wohler in 1828, is a crucial milestone in the development of chemistry.

The urea was first discovered in urine in 1773 by a French chemist named Hilaire Rouelle. In 1828, the German chemist Friedrich Wehler recovered urea in an unsuccessful attempt to produce ammonium cyanide:

It was the first time that an organic compound was synthesized synthetically from inorganic precursors without organisms being involved in the process. The results of this experiment discredited the belief in the origin of life and the primordial theory of living things: According to this theory, the chemicals that make up the body of living things are fundamentally different from the same substances in lifeless things. Understanding this issue played a very important role in the development of organic chemistry.

In fact, this important discovery of Wahl caused him to write a letter to Brasilius, noting that: “I have to tell you that: I am able to produce urea without the kidneys, whether human or dog. Ammonium cyanate is actually urea … “ Many scientists believe that Wohler should be considered the father of organic chemistry for this discovery.

Urea in the body of many organisms, as part of the urea cycle, is produced by the oxidation of amino acids or ammonia. Urea production occurs in the liver and is regulated by N-acetylglutamate. Urea is found as soluble in the blood (in the range of 2.5 to 7.5 mmol / l) and is excreted by the kidneys as part of the urine. In addition, a small amount of urea is also excreted in the sweat, which is excreted with sodium chloride and water.

Amino acids obtained from food, if not used for the synthesis of proteins and other biological substances, are oxidized by the body and produce urea and carbon dioxide, which is an alternative source of energy. Ammonia is another byproduct of metabolism of nitrogen compounds. Ammonia molecules are smaller than urea and also have higher mobility and volatility than urea. If allowed to accumulate, the ammonia will raise the internal ph of the cell to toxic levels. So many organisms convert ammonia into urea, even if such a synthesis would require the consumption of pure energy. The neutralization of urea at the operation stage and the composition being highly soluble in water has made it a safe vehicle for the transport and disposal of nitrogen. 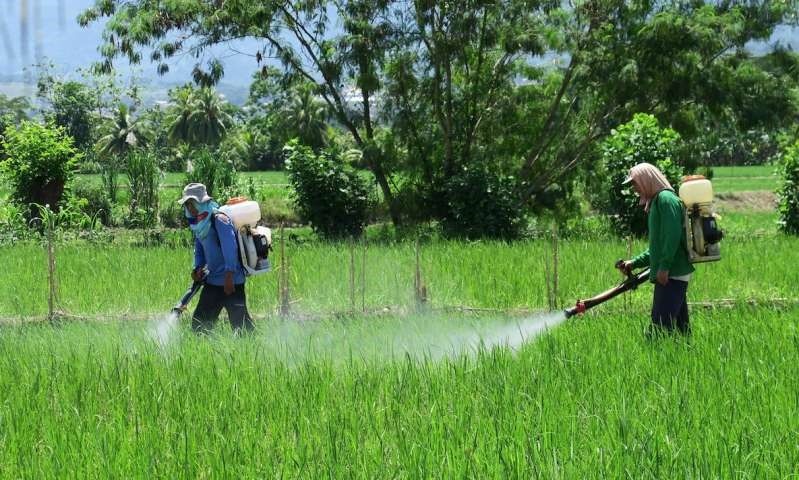 Urea is the most important and widely used fertilizer that is used as a nitrogen source for agricultural products to increase soil productivity and fertility. More than 90% of the world’s urea production is for use as nitrogen fertilizers. In general applications, urea has the highest nitrogen content (% 46/7) among all solid nitrogen fertilizers. Accordingly, urea generates the lowest transportation costs per unit of nitrogen supply. Urea typically ranges between 40 and 300 kg /Ha spreads. According to the importance of human food consumption, the role of urea in the process of food production is a matter of concern. Most of the urea produced in the world is solid, in the form of pearls, granules, and crystals. Nitrogenous fertilizers comprise about 60% of the world’s total fertilizer use, and unlike other fertilizers, farmers have demand for nitrogen again because the soil cannot retain nitrogen for long. Demand for these products will increase linearly as global demand for food products increases.

In irrigation crops, urea can be added to the soil dry or can be solubilized through irrigation water. The urea is easily soluble in water by its own weight, but if its concentration is increased It is becoming increasingly difficult to dissolve in water. The process of dissolving urea in water is an endometrial process that causes the soluble temperature to drop when the urea is dissolved.

As a practical guide, which is actually a simple and convenient method of urea fertilization (urea infusion in irrigation paths), it can be recommended that more than 30kg of urea be dissolved in 100 liters of water. In the case of horticultural products, leaf sprays can be used to disperse urea at a concentration of %0.2 to %0.5. In this case, urea with a lower biuret content is often used.

Urea raw material is important for the production of many chemical compounds, such as:

Urea is used in (SNCR) and (SCR) reactions to reduce (NO3) emissions that are present in combustion gases. For blotch systems, water-soluble urea is injected into the vehicle exhaust system. The ammonia from the urea decomposition process is reacted with the output nitrogen oxide and converted to nitrogen and water by a catalytic converter.

The biggest performer in urea industry

The most important urea players in the world – including the largest exporters and importers and producers are China, India, the United States and Russia, which affect the economic and agricultural developments of these countries.

According to the latest report The world’s largest producers of urea are listed in Table 1. this table, China is the largest producer of urea with a significant difference from other countries.

Production of urea in Iran

Currently, eight petrochemical companies in the country produce urea and ammonia, which are processed as follows:

Pardis Petrochemical Company manufactures and supplies ammonia and urea products, owns the largest ammonia and urea manufacturing complex in the Middle East and is one of the largest manufacturers of these products worldwide. High volume of production and technology, compliance with environmental standards, ease of access to natural gas feeds, maritime transport and access to storage facilities and dedicated loading docks for urea product export, including the advantages and features of the complex It has a clear perspective on the company’s position in international markets.

Shiraz Petrochemical Company started as the first production unit of Iranian petrochemical industry in year 1346 to produce nitrogen fertilizers.The company is located 45 kilometers from the city of Shiraz, near the river Kor and near Marvdasht. One of the largest expansion plans of the company in the year 1364 reached the operational stage. In this project new units of production of ammonia, urea, nitric acid, and ammonium nitrate were exploited at a capacity equal to 10 times that of the old units. Following the development process and following the removal of old units from the production cycle, the Shiraz Petrochemical Urea and Ammonia Third Plan was put into operation in year 1395. Implementation of this plan will play an important role in meeting the country’s needs as well as supplying it to world markets.

The largest urea importers are shown in below chart. 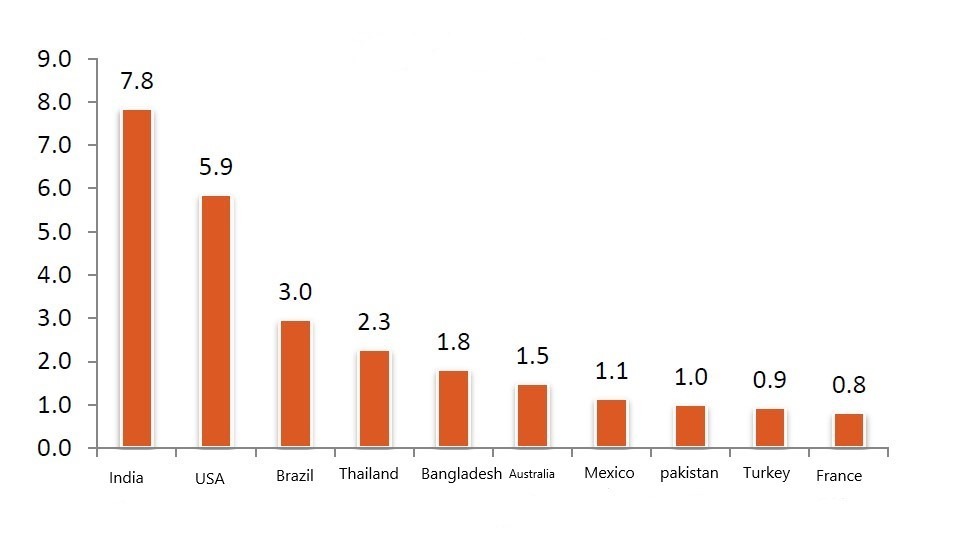 Iran has a production capacity of 5.5 million tons of urea per year, which consumes between 700 to 2500 thousand tons for domestic consumption. India is the largest export market for Iranian urea which importing about 1677 thousand tons of urea from Iran in 2016(It’s about %70 of Iran urea export). India is the second largest consumer of fertilizers in the world. As can be seen in the graph, urea is the most demanded chemical fertilizer in India. 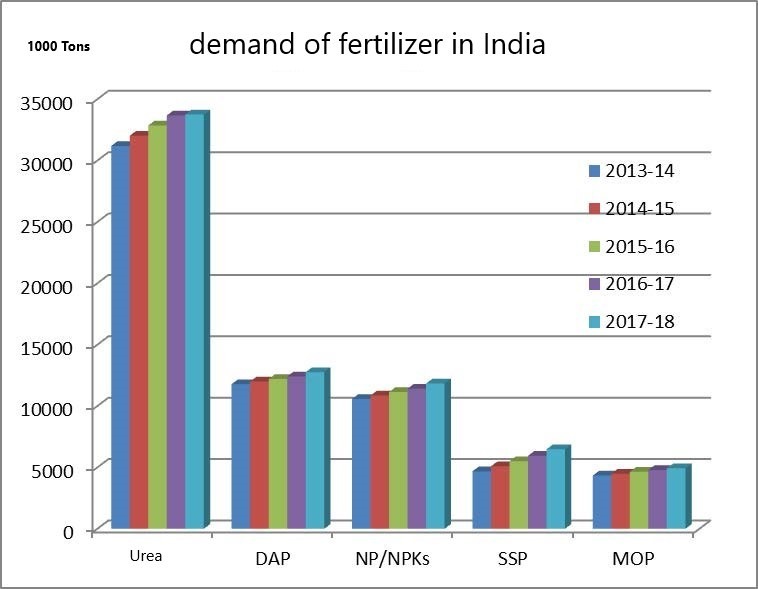 Due to the following factors, India appears to depend on chemical fertilizer imports (in particular urea imports up to 8 million tons per year). The Persian Gulf region is most likely to benefit from this demand because of its geographical proximity to its western ports.